While there are over 12 million people unemployed, there are hundreds of thousands of manufacturing jobs going unfilled due to the lack of people with the right skills to fill those jobs. Much of the demand for skilled workers arises because the automated factories of today demand workers who can operate, program and maintain the new computerized equipment.

On the other side of the equation, we have thousands of young men and women who are ending their military service and having great difficulty finding jobs because there is a mismatch in the skills they acquired in the military and the skill needs to find a civilian job, particularly in the manufacturing industry. Transitioning from military service to civilian life is challenging in the best of times, but has been even tougher in the current economy. For the estimated two million veterans who served a tour -- or multiple tours -- of duty in the wars in Iraq and Afghanistan, there are even more hurdles than usual. The jobless rate amongst these veterans was more than 12 percent in 2011, well above the national average rate of the general population. It was even worse for veterans between 18 and 34 years old; their jobless rate neared 30 percent in 2011. In California, nearly one in four veterans ages 18-24 were unemployed in 2009, almost double the unemployment rate for the civilian population.

Other factors that come into play include medical advances that are resulting in greater survivability on the battlefield with more "Wounded Warriors" (severely injured service members) returning home. 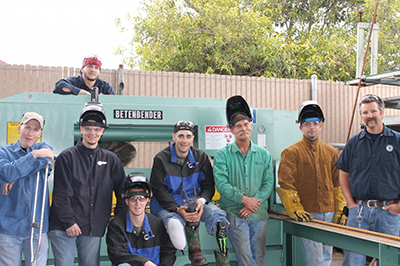 On October 5th, I visited the Workshops for Warriors facility in San Diego during their Manufacturing Day Facility Tour and met retired naval officer Hernán Luis y Prado, founder and president of Workshops for Warriors (WFW), a Board-governed 501 (c) 3 nonprofit organization that provides free vocational training to veterans of the US Armed Services. WFW assists the transition of veterans and injured veterans into civilian life through mentorship, training, and education. Their mission is to certify and place veterans of the US Armed Services into manufacturing careers. The main objective of WFW is to enable veterans to move from economic insolvency into self-sufficiency by learning necessary job-skills and earning a steady income.

In a subsequent interview, I asked Hernán about how he started his program and was astonished to find out that he actually started helping his fellow service members when he got back from his tour of duty in Iraq in 2003. He was tired of seeing his friends lose everything ─ their homes, spouse, and family ─ after getting out of the service and experiencing financial from not being able to make the transition.

While he was stationed in the Washington D.C. area, he opened his house, garage and back yard to friends so they could come over during their medical rehabilitations and work with his metal fabrication and woodworking tools. He continued to do this as he moved to new stations in Newport, Rhode Island, Virginia, and Mississippi. He bought more and more equipment until his garage was filled. When he was stationed in Mississippi in 2008, he and his wife realized there was a great need for formal training in manufacturing skills, and they determined to do what they could to fill this need.

Hernán said, "We are a military family. And we will do whatever it takes to get veterans who have the desire to work, work. We are going to create America's manufacturing infrastructure right here in San Diego. Every couple of weeks I go to either the Veteran's Center near Balboa Park or Camp Pendleton to speak to the Wounded Warriors. I'll get in front of a group of 200 to 400 Wounded Warriors and ask them how many have a job when they separate from the service. Up to now, I've only had one show of hands."

After learning that one out of seven members exit the military in San Diego, he was able to get stationed in San Diego, and he rented one storage unit, two, and then three, filling them with more and more equipment. Over the years, he and his wife financed all of this on their own by selling two homes, a car, and a motorcycle.

In February 2011, they rented a 4,500 sq. ft. building, but soon ran out of space and moved to a building twice the size in October 2011. In November 2011, Goodrich Aerostructures, in Chula Vista, California, donated $25,000 and a trailer in which their CAD/CAM training is conducted (powered by solar panels on the roof.) In addition, Goodrich Aerostructures business has donated nearly $1 million in equipment and materials to help WFW build out its class offerings.

When he left active duty in February 2012, he and his wife decided to formalize and structure a true training program to expand the scope of the impact they sought. Workshops for Warriors now has certified instructors teaching welding and machining to more than a dozen veterans in each 12-week course and offers training in CAD/CAM (Computer Aided Design/Computer Aided Manufacturing). The courses will expand to 16 weeks when they get their NIMS certification in welding and MasterCAM. A combination of vocational training and real-world job experience empowers veterans, increases their career options, their confidence and self-respect.

This hands-on training as well as classroom education ranges from hobby-level skills and access to common tools to fabricating commercially viable products on state-of the art machining systems. The program provides classroom experience, practical training, paths towards vocational certification, work-experience, and mentorship programs in order to assure long-term independence and integration into the workforce. Instruction is offered by skilled veterans, active-duty service-members, and industry experts.

Workshops for Warriors offers assistance to graduates of their program and previously certified veterans and their entrepreneurial endeavors in the following ways:

In order to provide actual work experience for veterans and be self-sustaining, Workshops for Warriors frequently undertakes projects to help disabled and homeless veterans, the community, and local businesses. The most recent projects include:

The students also make products for sale to raise money for the program. These products have been designed and patented by Hernán Luis y Prado. One is a set of leveler plates used to level machines on the shop floor, and the other is a machined skate used for moving machines and other heavy equipment around in a shop. Another product is a cofferdam designed specifically for use by the Navy to plug up battle damage in a ship hull until a ship can get to port to be repaired.

On May 24th, Hernán Luis y Prado was one of the 11 veterans honored as the Champions of Change by the White House Office of Public Engagement for the week of May 21st. The individuals honored that week had shown continued support for efforts to end veterans' homelessness, boost veterans' employment, treat problems with substance abuse, and develop treatment programs for those dealing with PTSD. In early 2011, the White House created the Champions of Change program to recognize ordinary Americans across the country that are doing extraordinary work in their communities.

On July 5, 2012, Goodrich Foundation announced that it awarded Workshop for Warriors (WFW) $100,000 to support its program that provides job training and skill certification to U.S. veterans at no cost to students.

"One area of our giving focus at Goodrich is to honor the men and women who serve their country in the armed forces," said Marc Duvall, president of Goodrich's Aerostructures business. "Enabling Workshops for Warriors to provide much-needed job training to veterans one of the best ways that we as a company can tell our veterans, 'Thank you for your service.'" Hernán Luis y Prado said, "America is hungry for manufacturing employees; there are more than two million unfilled manufacturing jobs in the U.S. right now, Hiring our graduates is a win-win for this country and the people who served it. We want to be a major driver for retraining the world's greatest fighting force into the world's most modern manufacturing force." The Goodrich Foundation grant will be used to hire additional instructors in order to increase the number of graduates from Workshops for Warriors.

The Society of Manufacturing Engineers also donated $25,000, recently provided another $5,000 towards getting NIMS certification for their welding training, and connected WFW to the Gene Haas Foundation. On September 11, 2012, the  Gene Haas Foundation, formed in 1999 by SHR co-owner Gene Haas, has announced a grant of $50,000 to Workshops for Warriors.

In addition to the grant, Haas Automation has also entrusted the program with four state-of-the-art Haas-CNC machines and made a donation of eight training simulators with a value of $444,000 to WFW.

To help get national exposure for Workshops for Warriors, the logo for Workshops for Warriors was featured on the Stewart-Haas Racing car No. 39 driven by Ryan Newman at the GEICO 400 NASCAR® race that took place at Chicagoland Speedway on Sept. 16, 2012. Mr. Newman said that while his goal is to be the best of the rest, "his No. 39 Chevrolet carries a special paint scheme this weekend that recognizes an organization whose goal is to assist veterans in job training and helps them create the best post-military-service life possible. It's called Workshops for Warriors and it was founded in San Diego, Calif., by U.S. Navy veteran Hernán Luis y Prado, who recognized and acted upon the need to help veterans find jobs after leaving military service."

To date, the list of companies and organizations that have donated equipment, materials, and supplies not mentioned already includes, but is not limited to, Betenbender Manufacturing, Inc., Industrial Metal Supplies, MasterCAM, Microsoft, R-K Press Brake Dies, Inc., Sandvik, Scotchman, SolidWorks, and Torchmate. All we hear about in the news media is that corporations are only interested in maximizing profits and here we see evidence of them being generous to a fault to help a veteran realize his dream of helping other veterans.

Since October 2011, Workshops for Warriors has served 109 veterans, of which 57 veterans have graduated from the program for manufacturing jobs like welding and fabricating. The organization currently has a 100 percent job placement rate for its students. These veterans have earned 129 certificates (multiple certificates are available to each veteran.) The cost of tuition and all necessary classroom materials is free.

Because San Diego is a Navy/Marine region, the majority of the veterans that have applied to the program have been Marines (48 percent) and Navy (26 percent.). One percent served in the United States Air Force, and 13 percent were from other services such as National Guard and Coast Guard. Nearly all, 98 percent were enlisted men.

WFW welcomes companies interested in supporting our service members and their families and is looking forward to partnering with industry leaders, companies, and local businesses in order to provide training and employment opportunities for our veterans.If you would like to give back to our veterans, you can help by donating money or equipment to WFW. WFW is especially interested in fabrication, welding, and industrial companies that would like to assist in furnishing equipment, training, expertise, lessons learned, or supplies.

Workshops for Warriors has confidence that the young men and women exiting military service, once given the proper training and experience, will be able to re-integrate seamlessly into the civilian workforce.  Your support will help WFW facilitate access to good jobs for these Americans who have served their country and help them easily transition their commercially viable work experience to the manufacturing industry.