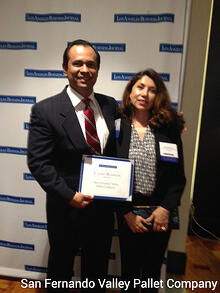 Over 45 Latino businesses were nominated and five awards were presented to the following businesses:

The Woodcraft Rangers After School Programs received the Advocate Award and Reyes Winery received the Lifetime Achievement Award. Despite not being awarded, Scale 1:1 and San Fernando Pallet Company were part of an incredibly inspiring group of Latino business owners who succeeded in overcoming adversity and challenges.  We here at CMTC were excited to see them recognized by the Latino business community.

“CMTC’s work and collaboration with California’s small and medium-sized manufacturers, particularly these outstanding Latino manufacturers in Los Angeles, is truly a privilege,” stated Jim Watson, President and CEO of CMTC.

“It was an honor to be nominated for the Latino Business Award for 2015. The fact that we are part of a team of business owners that have a shared purpose ‘to make Los Angeles a better city’ is inspiring. We started with nothing, we became educated and were given opportunities that we would not have had anywhere else in the world. We thank the Los Angeles Business Journal, the City of Los Angeles, and the City of Lancaster for the opportunities we have been given in order to become a multimillion dollar company.”

“We thank the Los Angeles Business Journal, the City of Los Angeles, and the City of Lancaster for the opportunities we have been given in order to become a mult-imillion dollar company.”

“As a Brazilian, being an honoree finalist for the LABJ Latino Business Award was a great acknowledgement. It was a privilege to be selected among so many other Latino companies. I thank CMTC for the nomination and the Los Angeles Business Journal for the fantastic event and the shot of motivation to continue growing and creating new jobs in Los Angeles.”

The LABJ provides nomination forms that require business demographic information and your company data such as revenue size, number of employees, private vs public company, etc. The final part is a 500 word description about your story along with a digital photo.  Award categories include:

The company must be 50% Latino owned or operated and located within Los Angeles County. If you are a CMTC client and a Latino manufacturer and would like to be nominated next year, please contact Ellen McKewen at emckewen@cmtc.com and we will assist you with the nomination form.

Topics: Manufacturing, Made in CA, Made in California