Uncovering the Benefits of Robots in Manufacturing [Part 2 of 2] 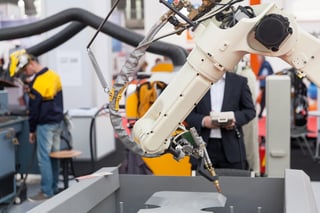 As industrial robots become faster, smarter, and cheaper, more and more companies are beginning to integrate this technology in conjunction with their workforce. This doesn’t mean that robots are replacing humans, though. While it is true that some of the more undesirable jobs are being filled by machines, this trend has several more positive outcomes for the manufacturing industry:

Creation of New and Better Jobs

According to a 2014 survey of U.S manufacturers, the biggest impact of robots in the manufacturing industry is that they will create new job opportunities for human workers. Instead of moving heavy parts or performing monotonous tasks, workers can learn to program and conduct maintenance on the machines.

As the manufacturing and robotics industries continue to grow side-by-side, a slew of new job opportunities are being created. Not only are these types of jobs more desirable, they take human workers out of potentially dangerous situations.

Industrial robots offer manufacturers greater consistency and better quality when performing repetitive tasks. Their behavior is predictable and their movements are precise. This means they are able to produce high quality products with little variation and greater consistency than their human counterparts.

Additionally, robotic workers do not need to take breaks and can work 24 hours a day without shift changes or other interruptions. Once a robot has been correctly programmed and trained to do a certain job, they can speed up production by decreasing part cycle times and creating a leaner manufacturing process which translates into higher profits.

See Part 1 to review the most common types of robotics used in manufacturing.

The first and probably the most obvious way that robots reduce manufacturing costs is that they do not require compensation. Although the initial cost may seem daunting, manufacturing companies will see a long term return on their investment. This is due to several key benefits:

Automation in manufacturing is highly cost-effective for companies of all sizes. Rather than outsourcing jobs overseas, smaller companies can use robots to perform selected tasks at a lower cost and with higher quality results than with outsourced workers.

This is important as it allows manufacturers to keep their operations in the U.S and still compete in the global marketplace. In fact, automated manufacturing is becoming more and more necessary for companies who wish to create more jobs in the U.S and stay competitive.

Manufacturing has contributed to much of the economic successes of the United States. The increased use of robotic workers is continuing to shape the future of manufacturing through job creation, healthy partnerships with human workers, and stronger competitive advantages for U.S manufacturers. The question now becomes “What will be the global impact of these trends?”