Additive Manufacturing: Past, Present and Future

With the possible exception of fire, no technology is ever really ready to contribute to manufacturing in a meaningful way until it’s been given time to grow and expand. Computers are a good example. Our current level of technological sophistication wouldn’t be possible without computers, and teenagers routinely take selfies using handheld devices with more computing power than was used to land on the moon. It should be no real surprise, then, that 3D printing (also known as additive manufacturing or just AM) hasn’t yet delivered on its promise. 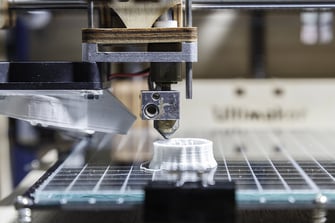 Continuing with the computer analogy, the first machine that even pretended to be a computer was built in the mid-1800s by Charles Babbage. The intent behind Babbage’s “Difference Engine” was to more quickly and reliably produce mathematical tables. It wasn’t until nearly a hundred years later that something approaching modern computers entered the workplace, and the home PC didn’t appear until 1977. By way of contrast, 3D printing has only existed since 1986 when Chuck Hull of 3D Systems first had the idea while developing a process that used UV light to harden tabletop coatings.

The technology has continued to grow and develop over the last 30 years, but the real explosion in interest came in 2012 with the introduction of home 3D printers. Prior to home systems, 3D printing had mainly been confined to back rooms and laboratories where it was used for rapid prototyping. Companies such as MakerBot managed to tap into the zeitgeist of the nascent maker movement, promoting home 3D printers as the ultimate workshop tool. While the promise of a democratization of technology was appealing to many users, most home 3D printers available are analogous to hole punch computing; slow and tedious.

Although consumer interest in home 3D systems has waxed and waned, industry applications have continued to move forward. One of the most enthusiastic early adopters of AM technology is GE. Unlike hobbyists, who may have gotten involved with this exciting new technology without any real idea of the challenges involved, GE quickly realized it required 3D printing experts if it wanted any sort of timely ROI.

This realization led GE to acquire a 3D printing company named Morris Technologies in 2012. More specifically, the acquisition added AM expertise to GE Aviation, where that knowledge was quickly put to work in devising a method of 3D printing fuel nozzles for use in its LEAP jet engine. Following some proof of concept testing, GE settled on an AM process called laser sintering to produce the nozzles and quickly discovered two of the basic tenets of 3D printing.

The first tenet is that 3D printing is possibly the most flexible manufacturing process ever invented. Rather than designing a part based at least partially on how easy it would be to produce, 3D printed parts begin life in a digital environment where the primary concern is functionality. It is possible, even routine, to build parts with extremely complex internal geometries that would be impossible (or exceptionally expensive) to produce using traditional manufacturing methods. GE’s nozzle features overhang an internal architecture that is manufactured in the course of a single build, rather than requiring multiple parts that must then be assembled.

The second tenet is that 3D printing saves money. In the case of GE’s nozzle, the savings are twofold. Since the part is manufactured over the course of a single build, producing it using AM saves time. While the AM process itself might be considered slow, it is possible to produce a complex part in less than 24 hours, which is lightning fast compared to the old method of manufacturing a series of smaller parts that require assembly. Time savings begin as a result of cutting out the need for assembly, more time is saved by reducing the need for extensive machining, and yet more time is saved by paring down or completely eliminating the supply chain.

Additionally, nozzles manufactured through 3D printing offer substantial material savings. Using traditional subtractive production methods, manufacturers can expect to lose up to 90% of the material required to build a part. This loss is particularly troublesome in industries such as aviation, which regularly uses titanium and other similarly costly materials. 3D printing, however, reduces expected material waste to less than 10%.

In a time where investor uncertainty has cast an unfavorable view of 3D printing in the minds of the general public, GE has doubled down. Following its initial foray into AM in 2012, GE has since invested millions more into 3D printing research and development, including the construction of a 300,000 sq.ft, high volume AM plant in Auburn, and a Center for Additive Technology Advancement just outside of Pittsburg. Every year the systems get faster, bigger, or offer improved resolution. As 3D printing technology continues to advance, GE has already placed itself in a position to take advantage of every improvement. It’s only a matter of time until other companies follow its lead.

Special thanks to:
John Newman who is a freelance writer in the manufacturing industry.