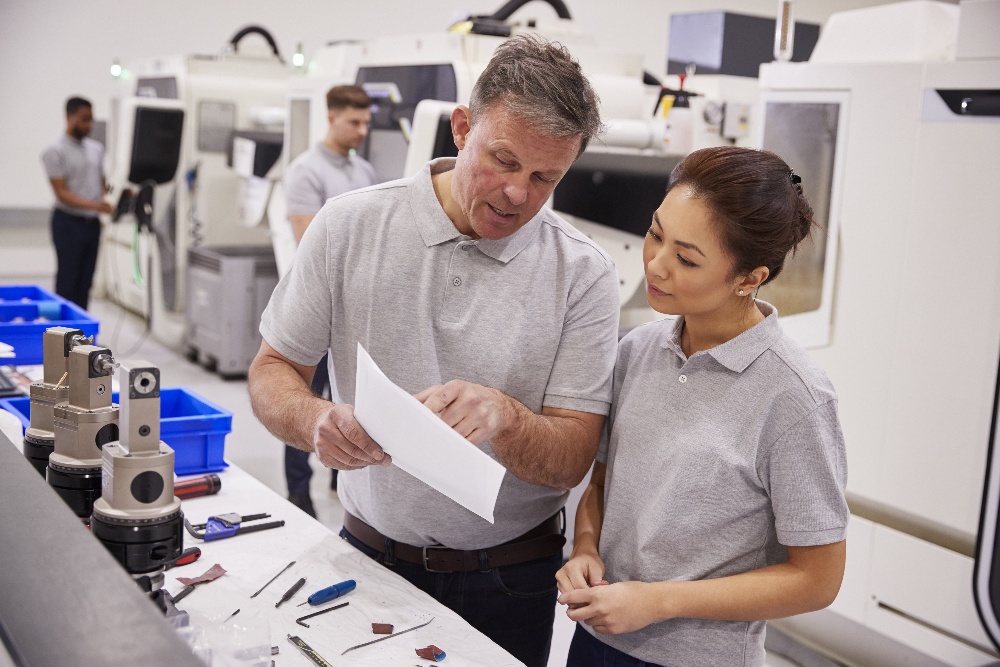 By now, you’ve probably heard the troubling statistics. IndustryWeek reports that nearly 25% of manufacturing employees are age 55 or older, and many will soon be leaving to enjoy a well-earned retirement. Unfortunately, there’s no influx of new talent waiting to take their places. Some people feel shut out of job opportunities by degree requirements they don’t have; others lack on-the-job experience they can’t get; and then there are those who still view all manufacturing jobs as “dark, dirty, and dangerous,” and simply aren’t interested in the industry.

Because of this talent shortage, experts predict that there will be a total of two million skilled manufacturing jobs unfilled by 2025 if nothing is done now. To combat the next generation of workers’ concerns about training and misconceptions about manufacturing, manufacturers of all sizes have once again begun embracing apprenticeships—that age-old method of transferring the tribal knowledge of one generation to the next.

The Re-emergence of Apprenticeships

When you hear the word “apprenticeship,” your mind may have you traveling back to 16th century England, when a young man—sometimes barely into his teenage years—would indenture himself to a “master” who would train him in a skilled profession, such as blacksmithing, in return for a bed, daily bread, and maybe a few shillings. Apprenticeships in the 21st century look much different, and since January 2017, employers have hired nearly 410,000 apprentices! Today’s apprentices are male and female, ranging in age from late teens to middle-age. Apprentices can be found in a diverse number of fields, including healthcare, hospitality, finance, construction, energy, information technology, transportation, and of course, manufacturing. Some of the most in-demand manufacturing apprenticeships include CNC Set-Up Programer, Precision Machinist, Industrial Maintenance Repairer, Mold Maker, Die Caster, Plastics Fabricator, and Tool and Die Maker.

People accepting an apprenticeship begin their journey on the lowest rung of their chosen industry’s ladder, usually making minimum wage—though some employers may offer a much more competitive salary to attract highly motivated apprentices. Moving up can take time, with some apprentices having to put in as many as 8,000 hours of work depending on the skill level required of the discipline. As apprentices put in more hours, their compensation increases and they begin to take on new levels of apprenticeship. After graduating from being an apprentice, they move into  journeyman status and finally into a master craftsperson position. Aside from on-the-job training, many apprentices also benefit from in-house and college instruction; some manufacturers are even paying all or part of their apprentices' and journeymens' tuition, enabling them to obtain a college degree or advanced certification while still earning money.

An Apprenticeship Story of Success

Following his high school graduation, Corey Nadeau was a bit lost. He completed a semester at Onondaga Community College in New York but dropped out, deciding that the traditional school route was not for him. He next took a job as a new hire at Precision Systems, a manufacturer of steel, aluminum, stainless steel, copper, and titanium products for the military. “I was offered the apprenticeship after being there for just a few months,” Nadeau says.

Now, his responsibilities include basic operations on manual mill and lathes, general assembly work, operating a balancing machine, and general labor in other departments. He’s making $12.50 per hour in the program, with the opportunity to make over $20 an hour in the future after he completes his advanced training—a far cry from the $11 an hour he had been earning at McDonald’s.

Corey will obtain his journeyman card in CNC Machining and his associate's degree after completion of the apprenticeship. He’ll then be trained on more advanced manufacturing methods, while developing leadership skills that will allow him to train other apprentices in the future.

How to Start an Apprenticeship Program

Support for apprenticeships continues to grow—and hybrid programs offering a combination of online learning and in-house training are also picking up steam. In mid-2018, Congress significantly increased the federal appropriation for apprenticeship to $145 million. If you’re interested in developing an apprenticeship program for your manufacturing business, there are a number of resources available on the U.S. Department of Labor website. Here, you’ll find the information and building blocks you need to start building your program, including:

Apprenticeships have been around for centuries, but temporarily took a backseat to the pursuit of college degrees. Now, however, apprenticeships are making a big comeback—and they’re a win-win for workers and employers alike. Apprentices’ learn valuable skills without having to pursue a degree that many can’t afford, while employers benefit from increased productivity and retention (without losing valuable tribal knowledge that might otherwise leave the company along with retirees). If you’re looking to bring new talent to your factory floor, there’s no time like the present.