The State of California’s Aerospace Industry in 2017 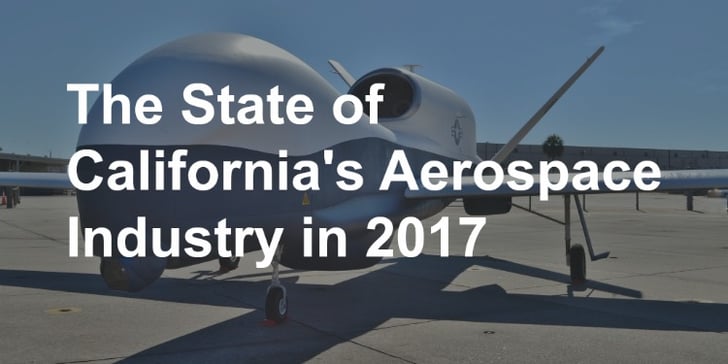 The aerospace industry in California has played a large role in the region’s economy for over a half century. With recent changes in the economy and a new administration in the White House, this is a good time to review the outlook for this vital industry.

Overall, things are looking good for California’s aerospace industry in 2017. Here are a few trends that point toward positive growth for small and mid-sized manufacturers in the near future:

Employment Is On the Rise

Between the early 1950's and 60's, the Department of Defense funneled over $50 billion into the California Aerospace Industry. In the 1980’s, when President Reagan increased defense spending, employment surged again. However, as the cold war ended and Pentagon spending began to decrease, companies began to consolidate and some even uprooted and moved closer Washington D.C, leaving thousands of workers without jobs.

Although employment is not where it was a decade ago, this doesn’t mean that sales within the industry have slowed down. According to a recent LAEDC report:

"Similar to other manufacturing industries, the aerospace industry has maintained sales while simultaneously experiencing significant declines in employment. This stems from innovation, advancements in technology, increases in productivity, efficiency and automation."

Furthermore, an article in the San Diego Tribune points out that:

“The industry's problems were highlighted in November (of 2015) by the closure of the Boeing plant in Long Beach that produced the C-17 Globemaster III cargo plane, eliminating about 400 manufacturing jobs. But that loss could be far offset by the $80 billion-plus Long-Range Strike Bomber contract, which the US Air Force awarded to Northrop.”

But what does this mean for small to mid-sized manufacturers? As larger aerospace companies feel the pressure to cut costs and deliver products faster, more and more jobs are being farmed out to smaller manufacturers. For example, original equipment manufacturers (OEMs) have started outsourcing machined and sheet metal parts production in an effort to scale up their capabilities.

The Industry is Now More Diverse

Over the past few years, California’s Aerospace Industry has grown more and more diverse with big programs such as space launch-service providers, satellite makers and drone manufacturers moving to the region. This includes companies such as:

As mentioned above, the increasingly diverse customer base of both government and commercial contracts is expected to smooth out employment downturns that were typically driven by federal budget cuts or big contracts coming to an end.

This is good news for small and medium-sized manufacturers, too. For example, Boeing has been doing very little metal cutting or forming and has relied on its subcontractor base for the past decade. The recent move to California is expected to benefit manufacturers and suppliers in the area.

Analysts and industry leaders believe that the aerospace industry in California is poised for more growth.

Analysts and industry leaders believe that the aerospace industry in California is poised for more growth. With private companies such as SpaceX and Virgin Galactic, and defense projects such as the B-21 long-range strike bomber, thousands of jobs could be brought to the area. According to an LA Times interview with Jim Adams, principal with PricewaterhouseCoopers Strategy:

“From the peak in the late ‘80s, we’re at a fraction of what it was then. But at the same time, the aerospace and defense sector in Southern California is far from dead.”

While the California’s aerospace industry may not be as booming as it was a decade ago, things are looking up as the industry becomes more diverse and less reliant on government contracts.

Rising employment rates, steady sales and increased diversification give small and medium-sized manufacturers a reason to be optimistic.