5 Statistics That Show California Manufacturing is Alive and Well

The pandemic's impact on labor and supply chains contributed to the false notion that California‘s manufacturing industry is declining, but the Golden State’s output has exceeded national averages by 83% since the 1990s. And statistics for overall production, high-tech manufacturing, and sector niches demonstrate that California is a national leader. 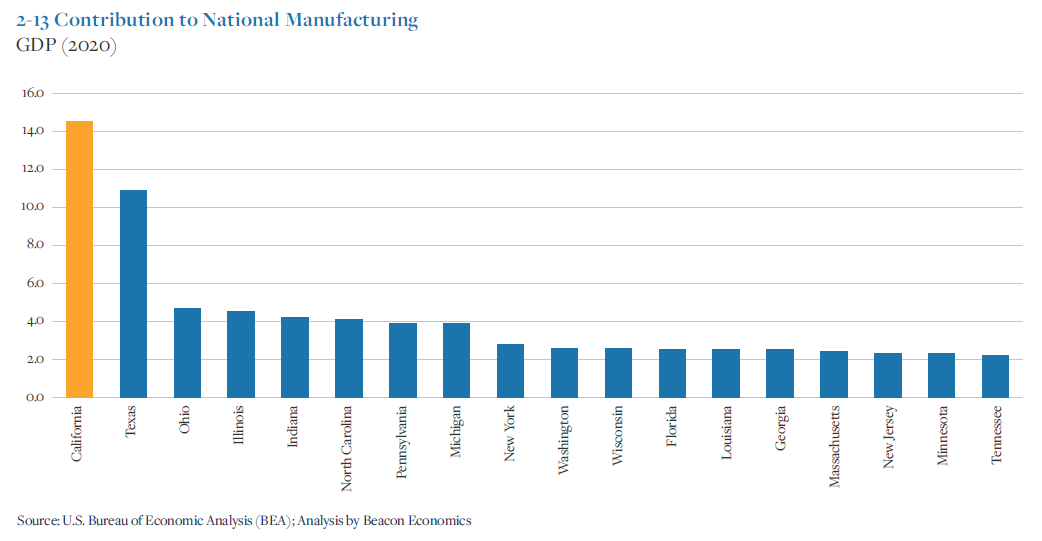 California is still the largest contributor to the U.S. manufacturing industry – both in terms of output and employment. The productivity growth in the state’s manufacturing sector has eclipsed the performance of the industry nationally by more than 80% since the 1990s.

Strictly looking at output, after Texas in second place, every other state is roughly 10 points behind or more. Further, California’s sector has grown 4% since 2000, despite reports of that year initiating a “Lost Decade” in American manufacturing.

As one of the largest states, some may misinterpret the data as inflated by California's extensive geographic size and U.S.-leading population base. Yet the size and population of the next-highest five states (after California and Texas) in U.S. manufacturing output are:

There's a minor correlation between population size and output, but not one significant enough to explain California's lead. The state boasts a massive advantage independent of its people or space, with its high-value, high-tech manufacturing sector.

2. 62% of Jobs Are in High and Medium-High Tech Industries

The major driver for California’s 40% output growth over the previous three decades has been transitioning from low technology to high- and medium-high technology industries. Today, that transition’s success is demonstrated by high tech and medium-high tech manufacturing comprising 62% of statewide sector employment. High tech manufacturing alone amounts to 36.9% of statewide sector employment, doubling the national average.

Underlying the transition is R&D investment, artificial intelligence, expanded worker upskilling, and improved safety. With high and medium-high tech manufacturing growing at the expense of its low-tech counterpart, the impact of worker training is evident. And, as a result, these employment statistics illustrate California’s preparedness to continue leading the economy into manufacturing’s future and what’s become known as “Industry 4.0.”

These trends are crucial because they demonstrate California’s ability to remain a leader as the broader manufacturing industry makes strides in the future of its technology. They also indicate better job security and economic resilience for workers. California’s overall competitiveness in training and retaining highly skilled workers has been and will remain critical to continued growth and success.

The report’s findings clearly illustrate the competitiveness of California’s employee retention rate. By 2020, the average compensation of highly skilled workers in the high tech manufacturing sector had increased from $130,000 to almost $180,000.

Companies in the high tech manufacturing sector tend to match compensation to inflation rates, keeping their workers’ pay at (or above) market rates. And, when it comes to raising wages, high tech companies have performed better than their low tech counterparts over the last ten years.

Approximately 16% of all aerospace manufacturing jobs and 28% of all IT and analytical product manufacturing jobs in the U.S. are accounted for by the state of California. These industries provide reliable indicators for both high tech manufacturing and the continued development of technologies that will usher in Industry 4.0.

Even with employment and competitiveness losses in the 1990s and early 2000s, aerospace manufacturing remains a relatively strong sector in California. It maintained an industry growth of 7% between 2010 and 2020, employing over 100,000 highly-paid workers at the decade’s close. Moreover, as aerospace companies continue to increase their California presence, we may see a return to the sector's defense spending.

The information technology (IT) and analytical products manufacturing industry in California — employing over 243,600 highly-paid workers — is another to watch for its broader impact. This subsector’s output directly contributes to providing advanced technologies for high tech manufacturing.

By keeping the transformative IT and analytical product industry in the state, California provides its other manufacturers with the best access and talent for R&D. These manufacturers are also positioned to benefit from national and international adoption of Industry 4.0 shifts as a leading supplier of technologies and innovation.

CMTC has a deep understanding of the constantly evolving environment small and medium-sized manufacturers (SMMs) face in the state of California. With a proven reputation as a "trusted advisor," CMTC’s mission is to improve the productivity and global competitiveness of California’s SMMs, providing a broad array of innovative services that help CA SMMs thrive in today's economy. To learn how CMTC can help you innovate and grow your business, contact us today.