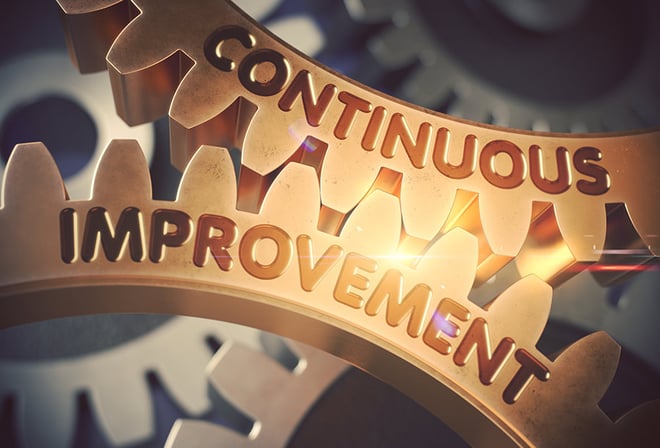 California’s manufacturing industry has traditionally been vibrant, with the state having the largest manufacturing output in the U.S. It is host to giant firms such as Apple, McKesson, Chevron, Alphabet, Intel, Hewlett-Packard, and Cisco Systems, but it is also home to tens of thousands of small and medium-sized manufacturing companies.

With so many products serving similar purposes competing for consumer dollars, manufacturers are constantly finding ways to pursue innovation, optimize productivity, and discover new opportunities. To achieve this, many are leaning toward a continuous improvement process, or CIP, to help them not only survive, but thrive in an increasingly aggressive marketplace.

CIP is not a new concept. It derives from the Toyota work culture of engaging everyone, from the CEO to the factory worker, to strive to do better in their jobs every day. It is built on the doctrines of team building and the 5S System, which stands for Sort, Straighten, Shine, Standardize, and Sustain. 5S was developed by Hiroyuki Hirano, an executive officer at ULVAC Technologies until July 2017, as a guide for continuous improvement in the visual workplace.

Stepping Out of the Status Quo

In the past, it was easy for manufacturing companies to rest on their laurels because they had established their brands and people seemed to trust their products. But in today’s manufacturing landscape where competition can be vicious, maintaining the status quo on processes that have been doing fairly well is a dangerous option.

While the domestic front is getting tighter, borders are opening up and more foreign products are invading our local markets. In fact, a new report from the US Census Bureau revealed that the nation’s international trade deficit in goods and service increased from $48.9 billion to $50.5 as recently as November as imports increased more than exports. Southern California also faces unique challenges of its own, as competition from Canada, Mexico, and other US ports erodes international business opportunities.

So what can California manufacturers do to break away from the status quo? Adapt and evolve. By adopting new methods such as Lean Manufacturing, or by embracing new technologies like SMART Manufacturing, they can change the dynamics of doing business and evolve to meet customer preferences. Think of how eBay is restructuring to take on Amazon, how mobile apps are bringing the traditional taxi industry to its knees, and how brick-and-mortar businesses are using geofencing to compete in an increasingly digitized world.

Manufacturers need to think in a similar manner, and intelligent and flexible manufacturers are now utilizing continuous improvement processes to prop up their businesses. But not all processes are created equal; they can range from simple changes in the day-to-day workings to major shifts such as re-engineering across a global structure.

Building a Culture of Continuous Improvement

Building a culture of continuous improvement is not achieved overnight, but over time. It starts with a change in mindset from the old way of doing things until gradually everybody gets on board. And to do this, the chosen CIP must compel everyone to use the same language and be on the same page—this means establishing rules and guidelines in every aspect of the manufacturing journey. In addition, three critical steps need to be followed for success:

Hierarchy is an important structure of the organization, but when the authority to make decisions is centralized, middle managers will have less liberty to initiate improvements to existing processes. Sharing leadership and engaging frontline managers to take ownership and accountability of their assignments will challenge them to make decisions within their authority and seek new ways to constantly improve the way they perform.

Collaborating with your Team

Leading by example is by far the most effective stimulus to inspiring continuous improvement support from employees. Good leaders are good followers. Leaders who know how to follow gain more respect and trust from their employees who in turn become more engaged and committed.

The Continuous Improvement Process: Getting the Help You Need

So where to begin? Some companies choose to hire a CIP Manager, while others may look to outside resources such as those published in a recent issue of the LA County Business Connect. Lastly, while it may be inherent in the process’ name itself, it shouldn’t go without saying that once you’ve put a continuous improvement process in motion, never stop improving.